Weird? Creative? Animal cruelty? Belgian artist Wim Delvoye makes tattoos on live pigs and pig skin. The artist is vegetarian and uses pigs only for the work of art and not for food. 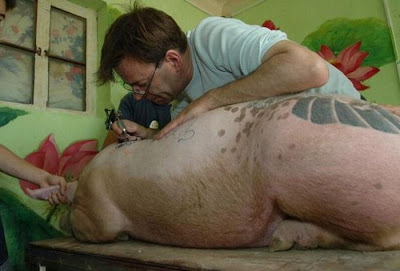 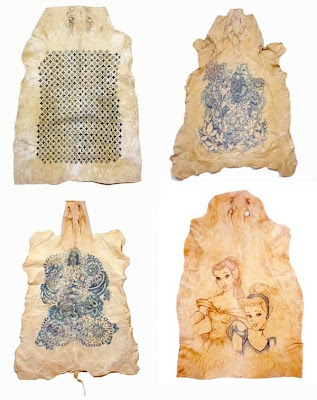 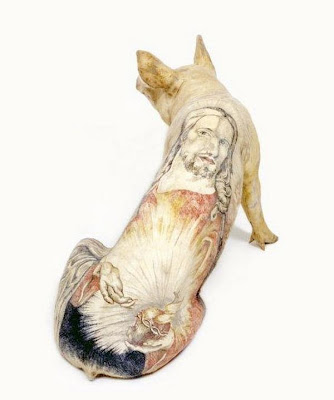 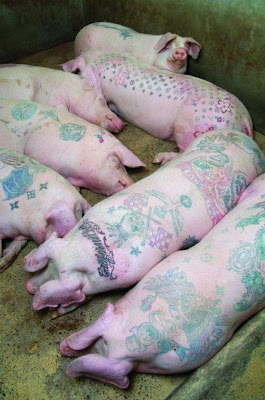 that's interesting. always heard artist practiced on pig skins, but on a live pig? i don't know if that's animal cruelty or not, if the pig isn't thrashing in pain i wouldn't think so. humans do allot worse to animals... just look at the food industry.

those pigs look dope in the last pic!!

That's terrible. What's wrong with that guy? Oh I guess if it's in the name of 'art' it's ok right? Who does he think he is? Poor piggies. :(

damn, his studio must stink..

Keep up the good work, but make sure your... uh... clients :) have a good life.
They simply look amazing!

If he's going to torture them by stabbing them with needles repeatedly for "art", then the guy might as well stop pretending to care about animals and go back to eating meat. All of the people that I know who eat pork think that this "art" is abhorred. Humans can choose to modify their bodies; other animals cannot. I'm not disputing the treatment of the pigs before or after the process, because I simply do not know, and I'm not implying that the "artist" is intentionally malicious; just sick in the head and not thinking clearly. When all the willing humans out there who would be down with even experimental tattoos, I can't imagine why anybody would choose to instead practice on an animal who never asked for it. If you grabbed some guy off the street and proceeded to tattoo him without his consent, you'd go to jail or at least be sued. Pigs aren't humans, but they still have the right to bodily respect, do they not?