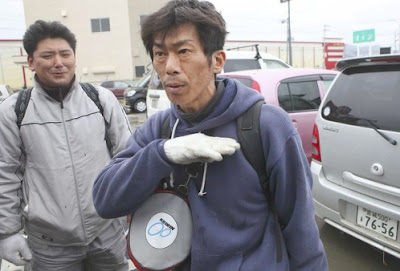 This is Hideaki Akaiwa. When the Tsunami hit his home town of Ishinomaki, Hideaki was at work. Realising his wife was trapped in their home, he ignored the advice of professionals, who told him to wait for the army to arrive to provide search and rescue.

Instead he found some scuba gear, jumped in the raging torrent - dodging cars, houses and other debris being dragged around by the powerful current, any of which could have killed him instantly - and navigated the now submerged streets in pitch dark, freezing water until he found his house. Swimming inside, he discovered his wife alive on the upper level with only a small amount of breathing room, and sharing his respirator, pulled her out to safety.

If he had waited for the army, his wife of 20 years would be dead.

Oh, and if that’s not enough badassery for one lifetime, Hideaki realised his mother was also unaccounted for, so jumped back in the water and managed to save her life also. Since then Hideaki enters the water everyday on a one man search and rescue mission, saving countless lives and proving that two natural disasters in a single day, and insurmountable odds can’t stand in the way of love. This man is my hero.

That is some of the coolest shit I have heard in a long time. That guy is my hero too! lol :)